﻿The Kimono is part of Japanese traditional culture. Through the experience of getting dressed in a Kimono in the authentic and traditional Japanese way, or "Kitsuke" (dressing), we hope many people can discover their inner beauty and dignity.
Through this fantastic, legendary, Japanese cultural experience, we hope to bring happiness and peace to as many people as possible. 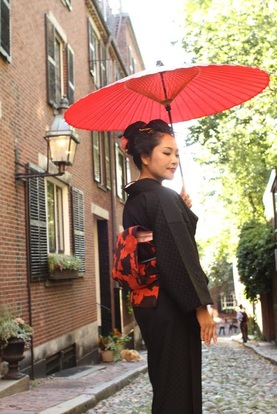 Seiko Kitagawa is a graduate of the Japan Women's College of Physical Education. Majoring in Dance, she intensely studied various styles including Traditional Japanese choreography and posture, Jazz, Modern and Contemporary. While in college she was a Kimono Model in Hawaii,  representing Ehime, the prefecture in South Western Japan where she was born and raised. Along with her Kimono modeling career she learned basic knowledge of "Kitsuke" (Kimono dressing) by Ms. Hiromi Ichida. After graduation she worked as a backup dancer for the most famous Japanese traditional "Enka" singer, Mr. Saburo Kitajima for many years.  While on tour with Mr. Kitajima she learned a tremendous amount from many of Japan's most respected practitioners of "Kitsuke", as well as the art form of how to properly and elegantly wear Kimono.
As a dancer Seiko has appeared on major TV shows on NHK(Japanese TV station), talent shows as well as large music festival venues.  She also appeared as a featured solo dancer for many music videos by various Japanese Performing Artists.
Seiko started "Japanese Kimono Dressing ~Ayame~" in Boston, MA in the Unites States.
She also has a Facebook page, "Watashi Style" where she displays some of her original pieces of art, as well as chronicles her experiences living in the US.